Congratulations to Jim Cooney and crew of Comanche for being awarded line honors and the new course record in the 2017 Rolex Sydney Hobart Race.

Hobart, Tasmania (December 28, 2017) – Congratulations to Jim Cooney and crew of Comanche for being awarded line honors and the new course record in the 2017 Rolex Sydney Hobart Race. It was a tremendous battle between Comanche and Wild Oats XI. We are hopeful to see many more in futures races. We also would like to congratulate and cheer on all the crews who battled for the Tattersall Cup. Without these competitors the race would not be the spectacle that it is! Reichel/Pugh competitor's included: the Oatley's RP 100' Wild Oats XI and RP 66' Wild Oats X, Peter Harburg's RP 100' Black Jack, Bruce Taylor's RP 40' Chutzpah, and Tony Walton's RP 46' Hartbreaker.

Hobart, Tasmania (December 27, 2017) – Late Thursday evening,  the 12-year-old Reichel/Pugh-designed 100' Wild Oats X1 took line honors for the ninth time since launching in 2005. Wild Oats achievement was quite remarkable, having trailed Jim Cooney’s much newer Comanche much of the race they found plenty of speed in the windy downwind conditions and in the light air up Tasmania’s River Derwent. Wild Oats XI smashed last year’s record of one day 13hrs 31mins 20secs by after passing Comanche and crossing the Castray Esplanade finish line 26 minutes and 24 seconds ahead, in the new time of one day 8hrs 48mins 50secs, taking 4hrs 42mins 30secs off Anthony Bell’s Perpetual LOYAL’s record. This is a record ninth line honours for Wild Oats and a third record as nobody in the history of the race has achieved this honour before.

Unfortunately, Wild Oats was involved in an incident of not keeping clear of her rival the 100’ Comanche exiting Sydney Harbour. Following a protest by the Comanche, an International Jury met on the 28th in Hobart and upheld the protest, imposing on Wild Oats X1 a one-hour penalty for failing to keep clear, stripping her of Line Honors victory allowing Comanche to secure the title.

“In the end, the race to be first home on the water came down to a single maneuver judged to have been mistimed.  Yet to remember the Line Honors for this reason would be and injustice.  This was yacht racing in its purest form. Man and machine against the elements in all their guises.” - courtesy of Rolex

Reichel/Pugh’s other 100’ design Black Jack, took 3rd overall after leading the fleet out of Sydney Heads.  Black Jack was originally Alfa Romeo and launched in 2005 taking 2nd in line honors to Wild Oats that year. Alfa went on to huge success in Europe and came home to take line honors from Wild Oats in the 2009 Hobart Race, after setting a new course record in the 2009 Transpac race.  Alfa was then sold to Europe as Esimit Europa which went on to dominate Maxi racing in Europe. She was this year sold to Australian Peter Harburg who renamed her Black Jack. 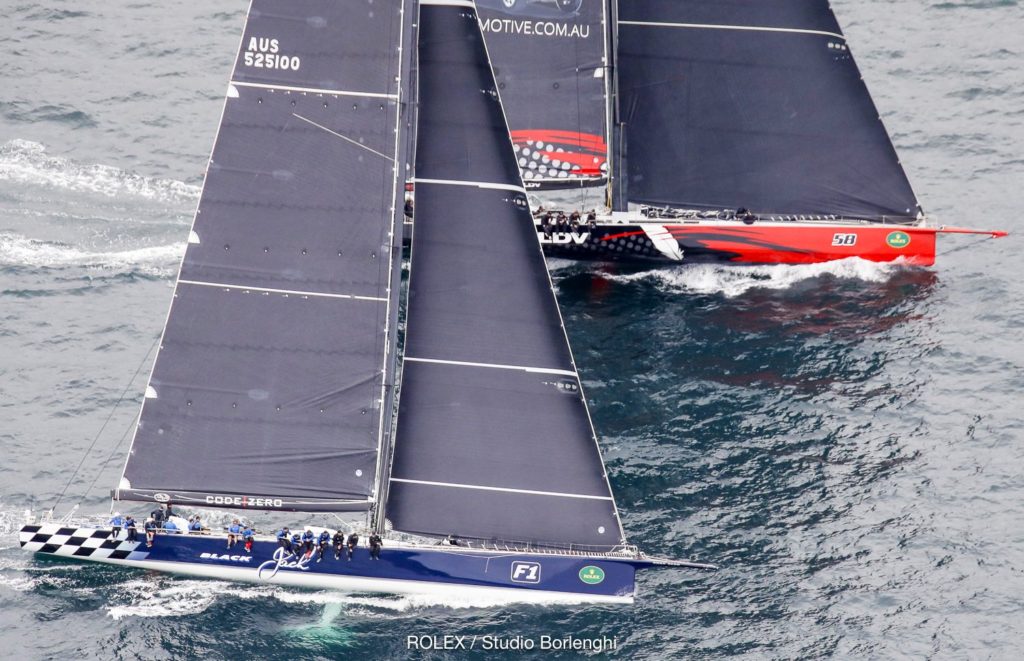 Black Jack leads out of Sydney Harbor on S2H 2017

Reichel/Pugh designs capped off a great year, our latest Wallycento design the 100’ Galateia won the Wally Class at the Maxi Rolex Cup in Sardinia and Galateia, and the 100’ Magic Carpet³ took 1st and 2nd place in the 2017 Wally Class Season’s Championship.For all information visit rolexsydneyhobart.com