Winning the Maxi RC class was the Reichel/Pugh-designed 85' My Song with a decisive five-point score line.

Porto Cervo, Italy (September 14, 2016) – Winning the Maxi RC class was the Reichel/Pugh-designed 85' My Song with a decisive five-point score line. Click for results. This win was particularly sweet as the RP85 heads for retirement, to be replaced by her newer, and sizable 130' sister. Oozing innovation, the new My Song is not only the latest high performance, genuine multi-role super sailing yacht to launch, but she also benefits from a series of new ideas which take the cruiser/racer genre to a new level. Naval architecture and engineering was done by Reichel/Pugh, conceptual design by Nauta Design, project management by Nigel Ingram of MCM, and construction by Baltic Yachts in Finland. My Song completed sailing trials successfully in Finland and has already arrived in the Mediterranean. Pictured are John Reichel and Senior Naval Architect Tony Beale at the My Song (85') retirement party. 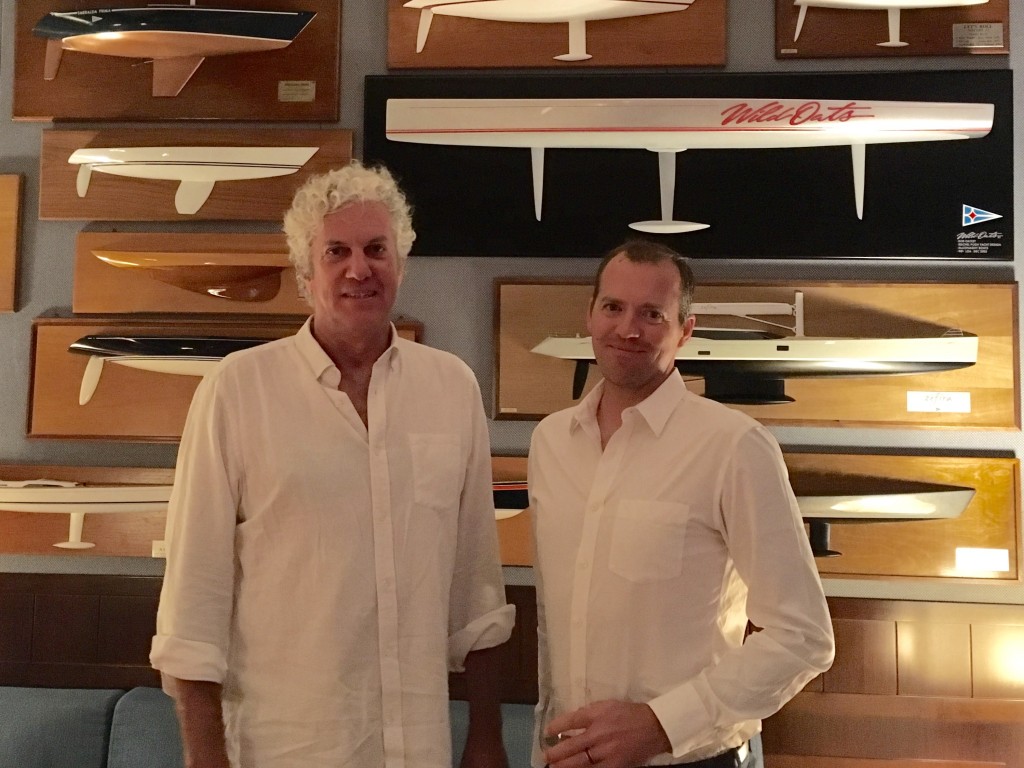 The Maxi Yacht Rolex Cup is held each September in Porto Cervo, Sardinia by the Yacht Club Costa Smeralda as a championship for the world’s most spectacular yachts. The event gathers ever-more impressive and technologically advanced fleets for racing on the waters of the Costa Smeralda every year. Competing divisions range from the Maxi 72 class, which competes for its World Championship during the event, to the Supermaxi division for yachts of over 30.5 metres.

In addition to My Song the record-size entry list for the 2016 edition boasted 48 entries including two Reichel/Pugh WallyCentos Magic Carpet 3 and Galateia. The WallyCento class was formed in 2010 as a box rule which would allow owners the thrill of no-compromise racing, while maintaining the essence of a Wally through clean exteriors and well-appointed interiors in a powerful 100’ package.

Magic Carpet 3, launched in 2013 was designed and engineered by Reichel/Pugh specifically to this rule and became the second yacht to join the Wallycento class. In 2014, the first full season of racing, Magic Carpet 3 convincingly claimed the 2014 Wally Season Championship wining three events including the 2014 Maxi Yacht Rolex Cup. Unfortunately, the end of direct WallyCento competition came when the first WallyCento launched changed owners and was modified to the Wally 107 Open Season which left Magic Carpet 3 as the only yacht still built to the WallyCento rule.

Following the launch of Magic Carpet 3 Reichel/Pugh was approached by an American client who was interested in joining the WallyCento action with his own yacht. His vision was a new WallyCento, styled with similar taste to Magic Carpet 3, but it would need to be decidedly faster. During the two years of design and construction, the Reichel/Pugh team developed a new hullform and appendage package while utilizing their in-house combination of design and engineering services to find weight savings in every component and shave a tonne from the displacement. Extracting the maximum performance was a challenge, but the initial goals were exceeded and the ultra-modern Galateia, launched in late 2015, has proved to be just as strong and stiff as Magic Carpet 3 despite her lighter form.