Congratulations to Reichel/Pugh 63 LUCKY owner Bryon Ehrhart, navigator Ian Moore and the rest of the crew as they have been confirmed winners of the Transatlantic Race 2015 by the event’s four organizers: the Royal Yacht Squadron, the New York Yacht Club, the Royal Ocean Racing Club and the Storm Trysail Club.

(July 16, 2015 / Day 18) – Congratulations to Reichel/Pugh 63 LUCKY owner Bryon Ehrhart, navigator Ian Moore and the rest of the crew as they have been confirmed winners of the Transatlantic Race 2015 by the event’s four organizers: the Royal Yacht Squadron, the New York Yacht Club, the Royal Ocean Racing Club and the Storm Trysail Club. LUCKY, formerly LOKI, was designed and engineered by Reichel/Pugh, constructed by McConaghy Boats and has won overall in the grueling Sydney-Hobart (2011) and now the 2015 Transatlantic Race. Late on Friday, July 10 Bryon Ehrhart’s Lucky was the first boat in the Transatlantic Race 2015 to cross the finish line at The Lizard, ending a brutal 8 days 21 hours 34 minutes and 4 seconds at sea on a 2,800-mile eastbound crossing of the North Atlantic, sailed mostly in strong winds.

“I remain in awe of the crew that prepared us so well over the last 10 years and led us to the opportunity to compete in the Transatlantic Race 2015. To win the event is well beyond our expectations given the long list of competitors we have come to respect. The win is a testament to the strength of the commitment we have made to the program and to each other,” said Chicagoan Ehrhart, who earlier this year acquired his Reichel/Pugh 63 (formerly the 2011 Rolex Sydney Hobart winner, Loki) with the principle aim of competing in this race. “We were humbled just to be allowed to compete in the longest standing and most respected ocean race,” Ehrhart added. 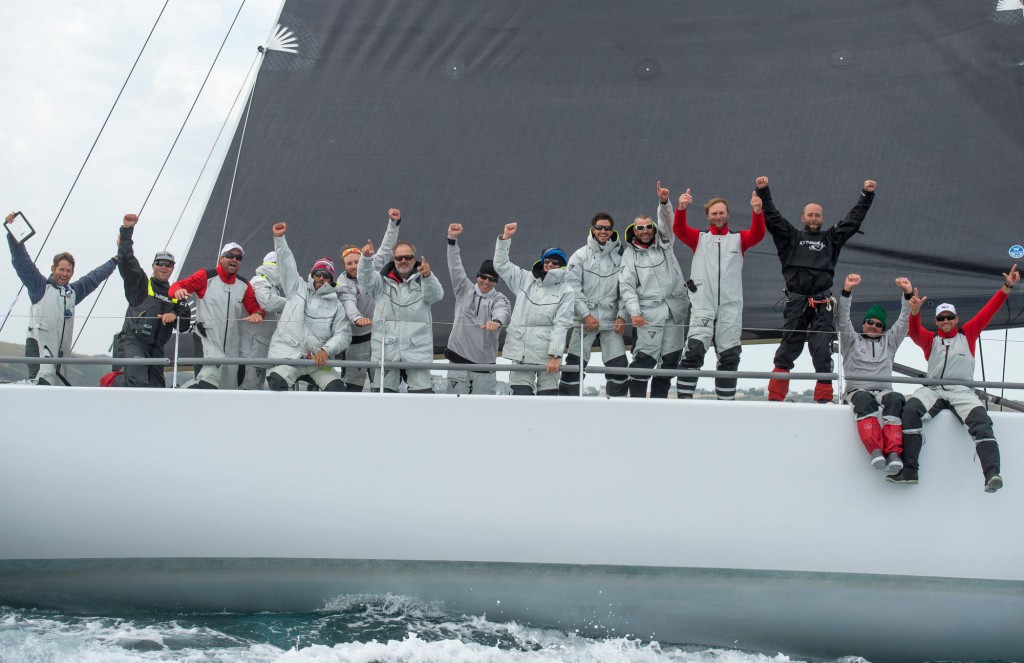 Competing in IRC 2, Lucky set off from Newport, R.I., on July 1 with the second group of starters, including Clarke Murphy’s longer and much-higher-rated 100’ Nomad IV. Nomad and Lucky sailed neck and neck for the first few days, but Lucky took a more direct easterly route towards Point Alpha, the ice exclusion, which allowed her to reach its south-western tip 13 miles ahead.

The two boats continued due east after passing the south-eastern corner of the exclusion zone, staying in the best breeze as they determined how cross to a patch of light winds on Sunday, July 5. Ultimately Lucky made the best of it, adding six miles to her lead over Nomad IV. By this stage both boats had passed all of the first starters, which had departed three days before them, with the exception of the biggest boat in the fleet, the 138’ Mariette of 1915. Lucky finally passed the 100-year-old schooner two days from the finish, at the same time as she was splitting from Nomad IV to head north.

With the Azores High forecast to extend over the western tip of the U.K. as Lucky made her final approach to the finish, she headed north where the breeze would remain strongest for longest. Thanks to this she managed to extend her lead to more than 60 miles, but with the risk that Nomad IV, approaching from the west-southwest would come in with pressure and overtake her.

Lucky lost ground as she headed north of the Scilly Isles early this morning and was forced to beat up the narrow passage between Land’s End and its off-lying Traffic Separation Scheme allowing Nomad IV to close. But it was too little too late.

Lucky crossed the line while Nomad still had 37 miles to sail in a dying breeze. Nonetheless it was close after more than 3,000 miles of racing—in distance sailed—considering the two boats are so different: Lucky, a 63’ long stripped out racer; Nomad IV, at 100’, a much bigger boat but fitted out with a luxury interior, and also having suffered a catalogue of problems on this race.

“It was always in the back of our minds that they were out there charging along,” admitted Moore. “But it would have been a big job for them to catch up 50 miles in 12 hours.”

As to what contributed to Lucky’s success, Ehrhart commented: “It was everything. The crew is certainly the leading star in this and the boat was well prepared as was the crew. It was a good navigational plan by Soapy . We think we sailed as well as we could. They didn’t leave anything out and there was nothing I wish we could have changed.”

History
In 1866, just 15 years after New York Yacht Club famously beat the British in what would become the America’s Cup, they ran their first Transatlantic Race. Since then it has been held irregularly, the most famous occasion being in 1905 when it was of political consequence in the build up to the First World War. Intended by Kaiser Wilhelm II as a means of illustrating German supremacy at sea at a time when ‘Britannia ruled the waves’, he presented the solid gold ‘Kaiser’s Cup’ as the trophy for which the 1905 event would be raced. Ultimately the Kaiser’s yacht Hamburg was roundly dispatched by American Wilson Marshall’s Atlantic with Charlie Barr, the Russell Coutts of his day, driving the 227’ three-masted schooner from New York to The Lizard in just 12 days, 4 hours, 1 minute and 19 seconds.

Background
The Transatlantic Race 2015 and the Atlantic Ocean Racing Series 2015 are organized by the Royal Yacht Squadron, the New York Yacht Club, the Royal Ocean Racing Club and the Storm Trysail Club. The 2796nm Transatlantic Race 2015, from Newport, RI to the Lizard, west of Plymouth, England, will offer staggered starts from June 28th-July 5th, 2015 , and is for Racing, Racing/Cruising and Classic monohull yachts with a minimum length overall (LOA) of 40 feet.There are no maximums. The Organizing Authority for the TR 2015 is the New York Yacht Club Regatta Association, Inc. The staggered start plan had 13 boats starting June 28, 20 boats starting on July 1, and the four fastest yachts on July 5.

Yellowbrick Tracking on tablet or smart phone: You must first download the YB Races app, then within the app, add the TR2015 race. There is no charge to follow this race.
for Apple iTunes
for Google Play/Android